Just released! Denver’s groundbreaking new book Religion of the Fathers: Context for the Book of Abraham is now available in hardcover, paperback, and Kindle editions. 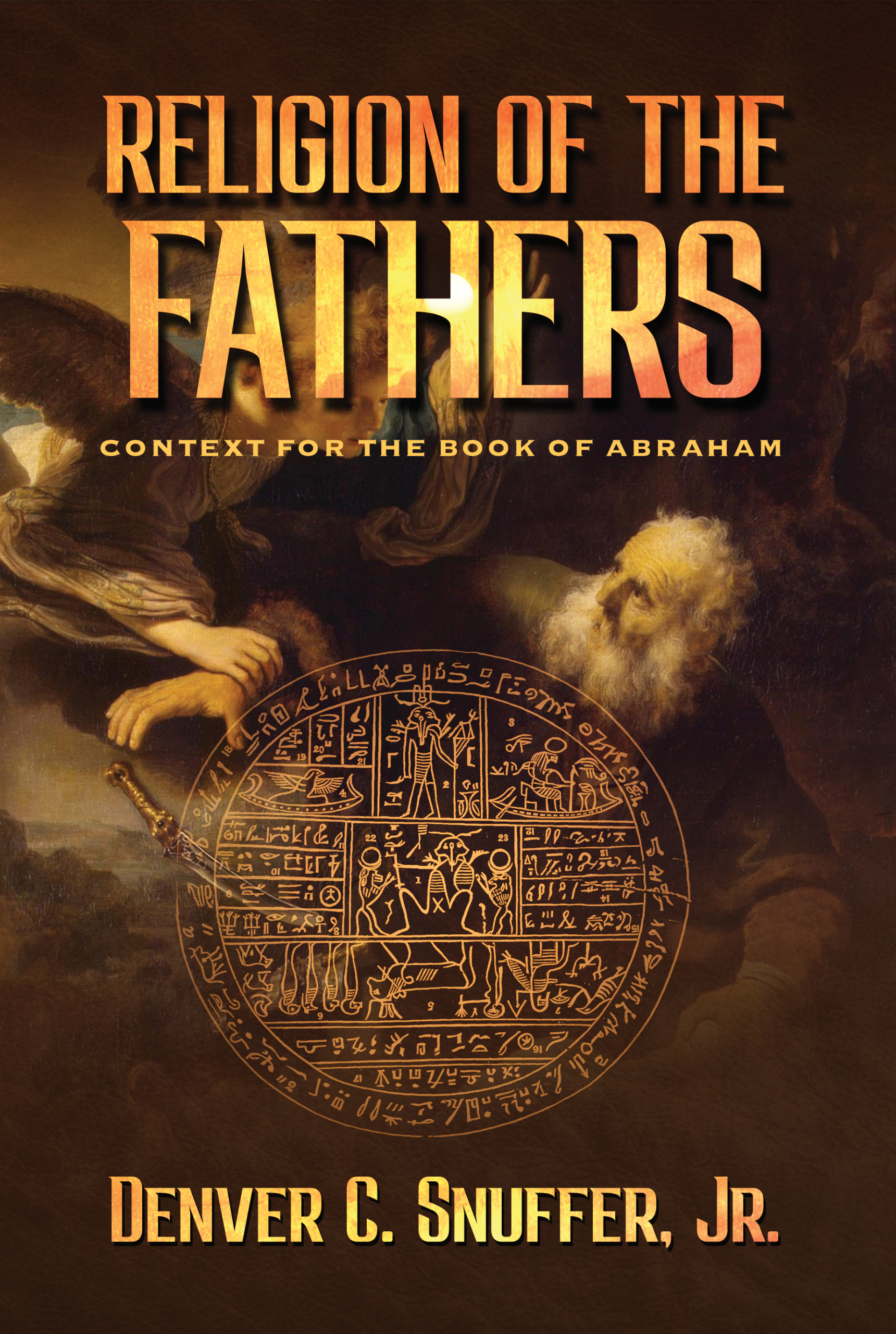 Based upon his recent paper by the same title, this book includes additional material presented at the Religion of the Fathers conference, together with the entire Book of Abraham as originally published in the Times and Seasons, and other important material. Religion of the Fathers presents a strong defense of the authenticity of the Book of Abraham as translated through Joseph Smith Jr. in 1835, and subsequently published in the Times & Seasons in 1842. It also presents an expanded view of the Restoration of the gospel, its ancient roots, current covenants, and prophesied future.

The first and most complete religion belonged to Adam and Eve. They lived with God, and after being cast out, they retained a memory of living in God’s presence. Adam taught the first eight patriarchs born after him the Religion of the Fathers, which involved direct communion, contact, and connection between mankind and God. It enabled the faithful to hear directly from the Lord His promise of eternal life, to seal them by covenant into His Heavenly Family.

Despite nearly universal apostasy and rebellion against God while Adam lived, the line of first or Patriarchal Fathers preserved the true religion. Their religion was Adam’s religion, and their understanding reached back to the Garden of Eden. They experienced visions, ascended into Heaven, obtained promises of exaltation, and were transformed by their experiences from men into angels of God.

After Shem (Melchizedek), an apostasy lasted until Abraham. Although he was raised by an idolater, Abraham searched for the true God of Heaven. He “sought for the blessings of the Fathers,” the very thing Malachi prophesies will return before the great and dreadful return of the Lord. Like Adam (at the beginning) and his descendant, Enoch, Abraham was caught up into Heaven and received a tutorial endowment from God. The covenant of the first Fathers was renewed and conferred upon him by Melchizedek, thereby restoring continuity back to Adam.

Abraham represents the key Patriarchal Father prophesied of in Malachi. Abraham not only renewed the covenant of the Fathers (including Noah and Enoch), but also, through the Abrahamic covenant, God established Abraham as the new head of the family of God on Earth.

The Book of Abraham has become a battleground because it is so important for our salvation. Recovering the Religion of the Fathers, becoming of one heart with the Fathers, and fulfilling the prophecy of Malachi are directly connected to Abraham. The more we can learn of Abraham, the more we can know of the covenant with the Fathers spoken of by Malachi, and those same blessings of the Fathers that will be administered again before the end. We can, if faithful, obtain all that the original Fathers received from God at the beginning.

Therefore, any book written by Abraham should be priceless to us.

The Lord’s “strange act” is approaching completion. The promises made to the Fathers are being vindicated. The Restoration has recommenced, and if we are faithful, it will not be paused or interrupted again. Although Israel’s numbers are few, there have never been great numbers willing to sacrifice everything for God.

If you have been looking for an easy way to share the message of the continuing Restoration with friends and family in a way that is simple, straightforward, and friendly, you might consider sending them to our new website thetentalks.com. It’s a great way to help them find and listen to (or read) Denver’s 10 lectures, in a simple and easy format, without having to scroll through tons of other material to find them.

Check it out, and let us know your thoughts!

As an aside, the10talks.com, tenlectures.com and 10lectures.com all take you to the same place, in case they can’t remember the exact web address. Trying to make it super easy!

Teachings of Denver Snuffer, Volume 6: 2019 (TDS6) has just been released! It is available in many different formats here: Scriptures.shop

It is also available as a free download here: https://www.restorationarchives.com/library/snuffer.php

This brings us up to the end of 2019 with Denver’s lectures and papers, excepting those delivered to a Christian-focused audience, which are scheduled to be released in the form of a separate book later this year. Regarding Volume 7 (covering 2020-2021), we anticipate that it will be released in 2022.

The TDS series makes it easy to collect and preserve a library of Denver’s material. Today might be a good day to review your library, and add any missing volumes.

ALSO – if you are aware of any transcripts, audio recordings, papers, or any other public materials that the Archive may not already have, please contact us so we can arrange to include them. Thanks!

ANNOUNCEMENT: We have officially released the English RE version of the Lectures on Faith, and also the Spanish/English RE translation of the Lectures on Faith! This was done as part of our outreach to all remnant groups, including the lost tribes of Israel, and all interested Gentiles everywhere. Much work has gone into the preparation of these stand-alone volumes, to make it easy to study and share them with the more than 1.1 billion native English and Spanish speakers worldwide, as well as the billions of others who speak English or Spanish as a second language.

If you are interested in picking some up and in the process getting the best price, the Aerio Store in Scriptures.shop carries both the hardback and softcover version of each volume. It takes them a few extra days to produce and deliver them, but the prices are much lower, so they may be worth the wait.

You can see and order them here: scriptures.shop/additional-materials/

A hearty “THANK YOU” goes out to all who participated in the translation and preparation of these important works of scripture!

Now available in Spanish for the first time, the Spanish/English Restoration Edition of the Lectures on Faith is available in hard cover here:

If you have Spanish-speaking friends or family, this may be a great way to introduce them to great truths about faith as it relates to God the Father and His son Jesus Christ!

Please note: This is a sneak preview – only the Hardcover edition is available today. The softcover will be available with the official launch soon. Enjoy!

On the Winter Solstice 2020, The Teachings of Denver Snuffer Jr., Volume 5: 2018 (TDS 5) was published and is now available in 2 different sizes of softcover, as well as hardback, Kindle, and a free PDF download as well. This volume covers the transformative year of 2018.

Denver once told us that one day, we will wish we had hit “print” on all of the materials of the Restoration. Ever since then, we have been working to preserve everything, and to make it all easily available worldwide. The best way to prevent the kinds of changes, erasures, emendations, and outright destruction of the truth that happened from 1844-1921 and beyond, is to spread copies of everything throughout the entire world, so that they can never all be tracked down and destroyed.

If you are interested in preserving all of Denver’s talks and papers, this is the easiest and least expensive way to do it. We hope you’ll take a moment to add it to your library, along with any other volumes of the TDS series that you don’t have yet.

You can find all of them here:
https://www.restorationarchives.com/library/snuffer.php

We hope you had a very merry Christmas, and that 2021 brings greater light and truth to all of those who seek it!

If you would like to subscribe, just search for “Book of Mormon Audiobook” in your favorite podcast app on your phone or other device, or follow this link for additional options.

The Restoration Edition of the Book of Mormon is the most complete, most correct, and most accurate iteration of that book that has ever been released. In that light, we are working hard to make the audio recording the best it can be as well – including using different voices for the different authors.

We have already recorded all chapters through the end of Jacob, and we are preparing to move forward through the rest of the book as time allows. If you are interested in participating as one of the readers, please send us a message through the contact page here. We will respond to you with instructions on how to send us a sample of your reading voice for consideration.

If you look in the Library area, on the Denver Snuffer page, you’ll notice that everything Denver has ever said publicly, for which we have a recording, has been transcribed and made available to the whole world. Everything, including all of the podcasts.

It has taken thousands of hours of dedicated labor by our amazing teams of volunteers to complete this task, which looked almost insurmountable at first. Many of the transcripts have received multiple passes to increase accuracy as close to 100% as possible, including even the smallest details. And scripture references have been updated to include both LE and RE citations in many cases.

The work continues, as our transcription teams now turn their focus to making additional passes on older material, to bring everything up to current standards. However, for a brief moment, we thought it would be appropriate to pause and take note of the milestone that was reached today.

Our deepest gratitude goes out to all who have assisted, in whatever way, in building the Restoration Archives. It is a meaningful work, and it matters to many people that this part of the Restoration is being carefully and diligently preserved.

Hello friends, we are excited to post this update from the Restoration Scriptures Foundation:

Announcing The Stick of Joseph in the Hand of Ephraim!

Over two thousand five hundred years ago, the prophet Ezekiel foretold a future day when the spirit of YHWH would stir the scattered remnants of Israel and restore them to life (Ezekiel 37:11-14). He also prophesied that a second scriptural record would come forth from Joseph to Judah, in the hand of Ephraim, to be used by YHWH to gather all of scattered Israel home into one people and one family that He will again claim as His own (Ezekiel 37:15-23).

This is that prophesied record.

If you have not already seen the announcement for the Stick of Joseph in the Hand of Ephraim, please review it here: totheremnant.com.

The Stick of Joseph in the Hand of Ephraim Ordering Info. For an extremely short time, until October 22, we have the opportunity to special order them with choice of cover material and colors, to match your RE Scriptures and journals. You can see the various options here: https://scriptures.shop/special-order/buy-now/

Paperback, hardcover, eBook and PDF download options will be available soon, probably in about 2 weeks. We will send another announcement when they become available.

Process for Bringing Business Before the Body for Ratification. Moving forward, the covenant body needs to adopt a process for proposing, ratifying, and adding new content to the RE Scriptures. On CovenantChat.com, you will find a detailed proposal called “Obtaining the Voice of the People,” outlining a process for bringing business before the covenant body for a vote. This proposal has already been sponsored by more than 25 people, across multiple fellowships and geographies, and is a main topic of discussion on CCC. If approved, The Restoration Scriptures Foundation intends to follow that proposed process, but if something else is introduced and adopted, RSF will follow what the covenant body adopts.